The Philippines, on the Pacific Rim, has a human history going back about 100,000 years. A first group called «Malayo-Polynesian» had an activity dated to about 4000 BC. Then, between trade, migration and colonization, coming from the Asian continent (China, Malaysia, Indonesia, Taiwan, Japan), European and American, the population has thus mixed, which makes that colors of skin and facies are very varied.

With different beliefs, as it evolved, Hinduism, Buddhism, Islam and Catholicism crossed the country. It is now a country with a majority Catholic belief, with a region with Muslim practice (Shafi'i). The Philippines (named after King Philip II of Spain) suffered several invasions, the longest being the Spanish colonization, starting in 1521, when the Portuguese explorer Fernand de Magellan arrived, until 1898, during the 1st declaration of independence.

Then United States and Japan participated in the history of the country which is now an independent Republic since July 4, 1946. However, the day of independence of the Philippines is June 12, corresponding to the 1st declaration of independence by the Filipinos themselves, in 1898. A new country, he went through a dictatorial period during the presence of President Ferdinand Marcos from 1965 to 1986; he and his wife were then pushed into exile.

Since then, five presidents have succeeded each other. The country is divided into 17 regions, 80 provinces, divided geographically under three names:

In the north of the country, island of the capital Manila. This district includes the islands of Luzon, Mindoro, Masbate and Palawan.

Grouping together many islands located in the center of the country. Economic capital, Cebu city. Cebu, Negros, Bohol, Leyte and Samar are the main islands.

Located in the south of the country, economic capital, Davao city. Mindanao and the Sulu Islands are grouped. 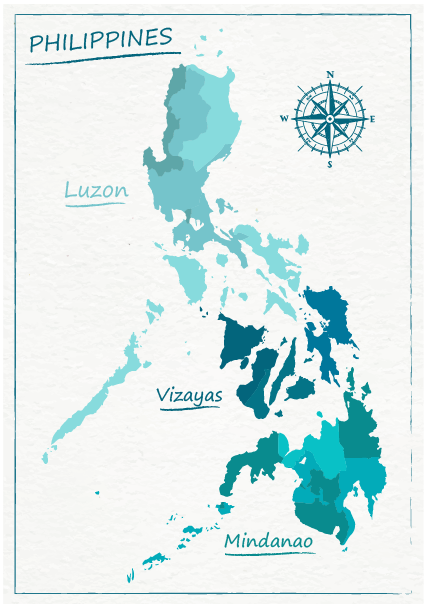 The official language in the Philippines is Tagalog, but there are many other dialects. The main ones are Cebuano, Ilokano, Hiligaynon, Bikolano, or waray-waray. Ask a person from the island of Bohol (located in the region of the language Cebuano), he will answer you that he speaks Cebuano with you but the Boholiano with his relatives. These languages, which tend to use the same word for repetition, have no conjugations and simple phonetics. The spelling is the same as in Europe. 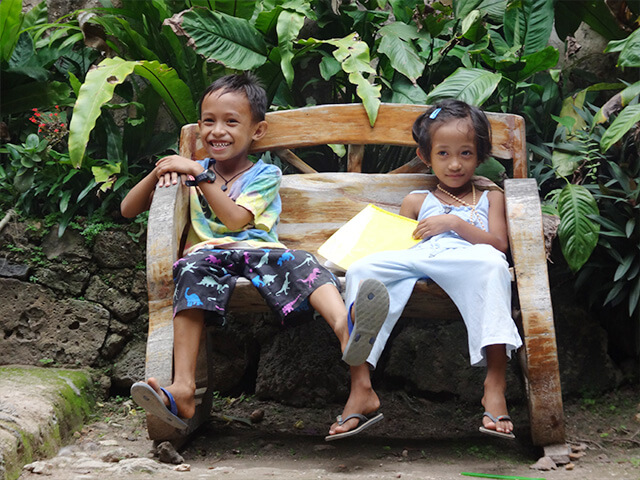 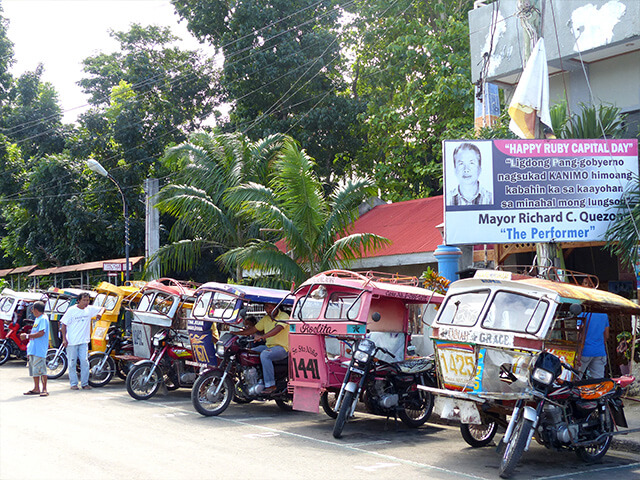 There are many Spanish words in the dialects, which often correspond to objects that the Filipinos did not use before the arrival of the settler. They express the time in Spanish, and in remote areas, when monetary amounts are significant, the accounts are expressed in Spanish.

English is a commonly used language, but by moving away from industrially developed areas, the practice is fading.

The country’s constitution is also written in English. Exchanges with the United States are a major factor. There is also a language called «Ta-glish», which is practiced in the capital Manila and is a mix of Tagalog and English. This language is practiced in politics but also in some TV series and comedy plays.

Beliefs are nowadays due to the practice of religion, mainly Christian, although there are still animist beliefs in remote villages, mountains and islands. Mother Nature is part of the daily life of many Filipinos and some islands have reputations related to the Voodoo or other healers. 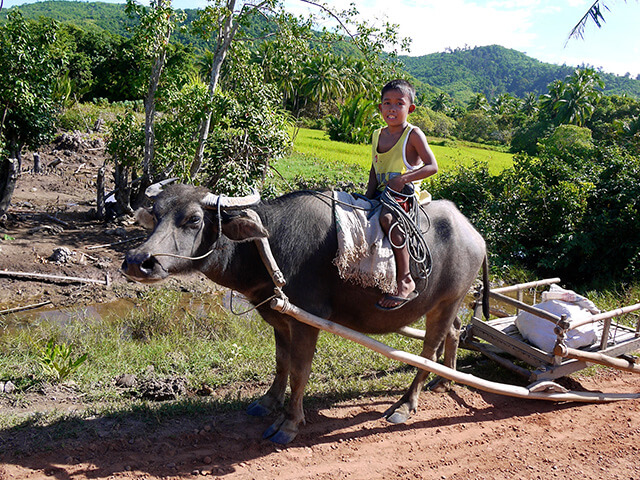 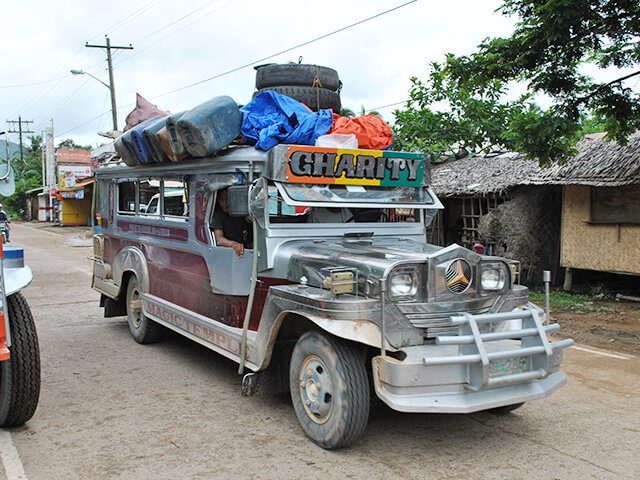 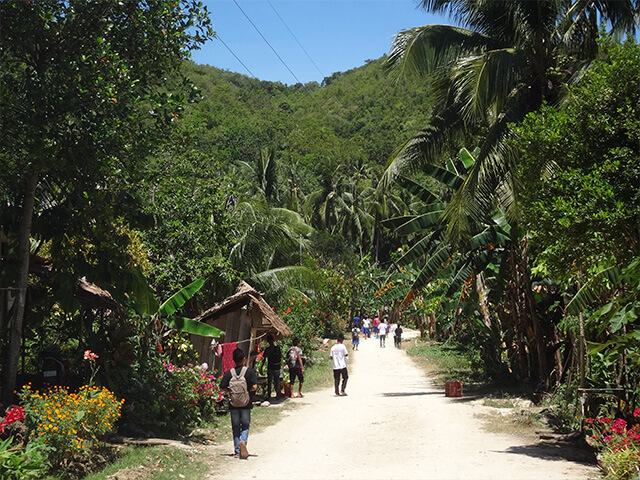 There are about 100 ethnic minorities more or less represented by 3 major groups established according to their arrival and geographical position in the archipelago, the «Negritos», the «Igorot» and the «Manobo». The «Ifugao» known for being former head cutters, who made the fabulous rice fields in stages at Banaue, are part of the «Igorot».

Tribes still live in remote areas where practices are ancestral. These geographical areas are remote and difficult to access. We find for example the tribes «T'boli» and «Bl'aan» in Mindanao, where, despite Christian and Muslim practices, animism remains the main belief, the «Batak» other «Palawano» in Palawan or the «Bajao», nomadic tribe of the seas. Urban Filipinos call them “indigenous tribes” because of their lifestyle.

An archipelago with a varied and sometimes surprising topography, this island complex is composed of a mountainous and volcanic chain, facing the Pacific Ocean. The total area is about 300,000 km2, with several islands predominating by their own surface (Luzon, Mindanao, Samar, Negros, etc.) or by their significant economic activity (Cebu, Palawan, etc.). 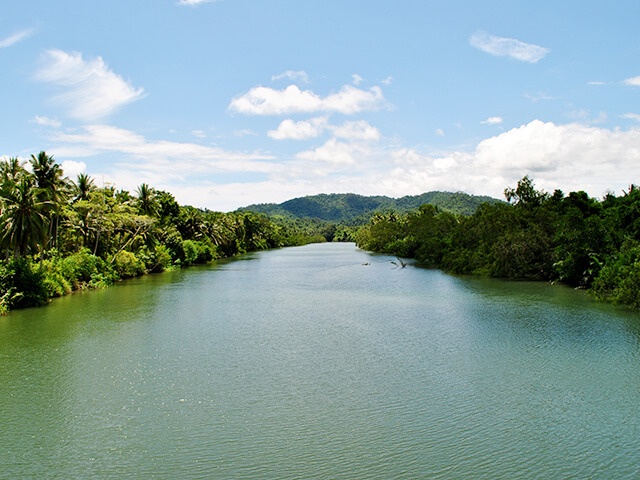 The geological formation makes us meet a cocktail of viewpoints, different natural formations, lakes, waterfalls, hot springs, caves...atmospheres… jungles, rice paddies, mangroves, hills, mountains, volcanoes, the Philippines offer us natural atmospheres and colors, where the shadows drawn by the sun that plays clouds, flora and the shape of hills make us admire these wild and spontaneous landscapes, lined with beaches of white or volcanic brown sand.